It might not be glamorous, it’s certainly not as effective as ‘back in the day,’ but it’s still here and it can still open doors.

Well, I guess the simple answer is one that gets a positive response. I hope that we’ve all set our expectations to a reasonable level and we’re not expecting £millions of sales revenue off the back of a few words. There is no silver bullet.

Think of the job you are asking your message to do. Yes, one day you want this person to buy your stuff, but for now, set some small goals as stepping stones on the way there.

For example, an initial chat with one of the technical account managers, a webinar sign up, a ‘yes let’s meet up for at that trade show.’

Or perhaps the first goal is modest and all we are trying to do is get some insight into the buyers world and learn from their reply, ‘we need sort out problem A before we’re going to look at exciting thing B.’

Tone of voice and choice of language are both important factors to consider. I’ve written a whole blog on the value of just speaking normally and not in business jargon.

If it’s truly cold, then it’s going to be tough

An email from someone you’ve never heard of, about a product you don’t know, that does a thing you don’t think about much… it’s not likely to go well. The odds are stacked against that one.

The first thing to look at is how to warm up the introduction.

Hello … I hope this email finds you well

Do you want to schedule a demo?

It’s pushing your agenda. It’s transactional. It goes straight in the bin.

We are better than this

It’s all about the connector

What if instead we have a connector. A reason for the contact which demonstrates relevance.

How about one of these

Mentioned that you were dealing with Z

We’ve just been through that with ABC we’ve got some knowledge on this one.

We’ve made a one page checklist, would you like a copy?

Does that sound familiar to you?

Unlike most vendors who use lines like ‘all your info in one place,’ we take a different approach and actually help inform decisions to improve C & D

We’ve had great success rolling out with peers E & F

Good idea to do some intro’s?

These examples follow some of the structures laid out in this piece from Yesware.

While I’m not a fan of all of the suggested ideas in the linked Yesware blog, I do see value in trying out the structures laid out – including the Before-After-Bridge, the Problem-Agitate-Solve, the Attention-Interest-Desire-Action.

Or if that fails, you could always try the Inigo approach… 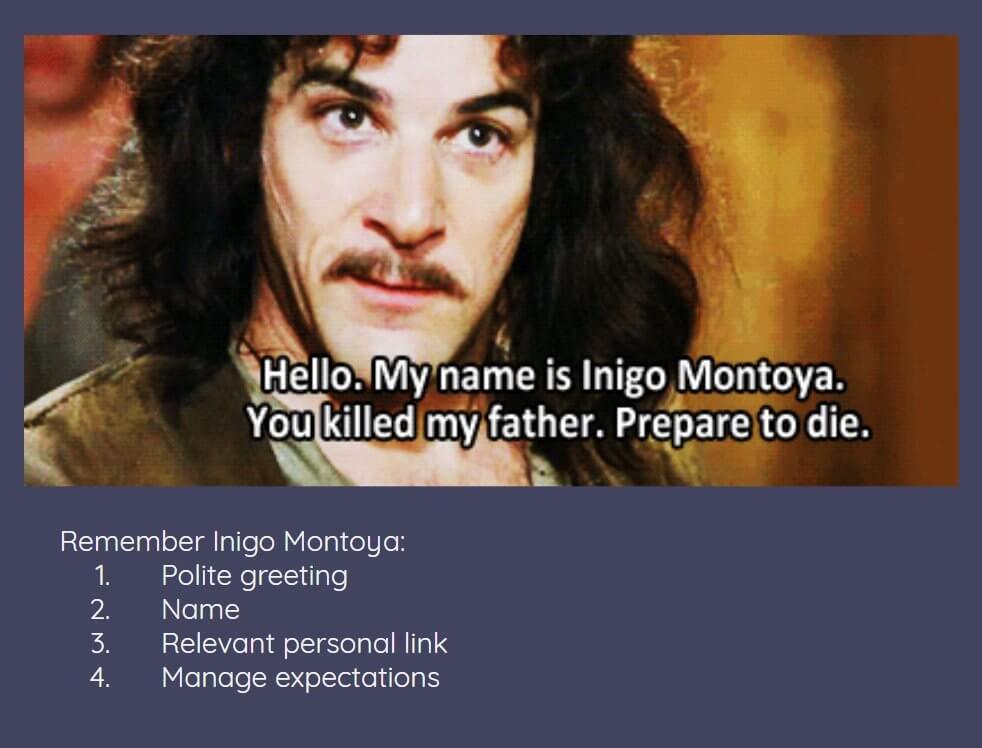 A health warning on all of these. They have to be true. Do not make this stuff up. You will only get found out and it will not end well. A bad Business Development email is not fun for anyone involved and could do your personal brand serious damage.

The good news is that this kind of relevance is relatively easy to cultivate. It just takes a little time in the industry to start picking up these kind of conversations and connections.

With all of the examples above we are effectively engineering an event trigger. Think about it from the buyer’s own perspective. They are spending their day cruising along doing their thing and they are unlikely to respond well to the super cold approach pushing your agenda.

However, if something comes up on the horizon that is going to interrupt them cruising along then they realise they are going to have to take some action.

The event trigger is that moment where it all begins. It is the first step towards a potential purchase.

Sometimes, external forces can present a powerful event trigger. The Business Development process can use this as an ally. A classic example is an upcoming legislation change. I’ve seen this time and again across different markets. A few years ago in the accountancy space it was getting ready for Making Tax Digital, right now it’s happening in institutional investment funds with the next stage of ESG legislation.

How are you getting on with setting up for the next reporting requirements?

However, be wary of the potential bandwagon event trigger. If the event is too broad, if it could potentially apply to many businesses, then it can lose its ability to induce action. Take GDPR for example, because it applied to pretty much everyone, we all got bombarded with information and suddenly every man and his dog was an expert providing consultancy. It got real noisy, very quickly.

This is yet again, why as a BD person going deep in your niche is a good move. As with all things in BD, a focused Business Development email is more likely to have the desired effect than its generic counterpart.

The ESG example is pretty niche, it’s not being chucked around by everyone. However, for a few select people right now in the UK, it is right up there in box one, it’s urgent and important.

How persistent is too persistent? This is a tricky one, and to be frank I don’t believe there is a simple answer.

What I do know is this: I sometimes see LinkedIn status posts saying ‘if I don’t reply to your first email, it means I’m never going to buy, don’t message me ever again.’

The thing is, if I had stopped after a single email and never darkened their doorstep ever again, I wouldn’t have succeeded in any role over the past 15 years. There is no way around this, it is the unglamorous side of Business Development. Unfortunately, this does mean that sometimes you are going to push a little too hard from time to time. It’s that or not enough (and get nothing done). Rule 1 applies here – don’t be a d*ck.

I can think of BD wins I’ve had which turned into 5 and 6 figure spends year on year which started after being that little bit persistent in an email.

‘Stu, I keep seeing your messages, I know we should talk, thanks for bearing with me.’

We did talk. We went on to run more than £200k of media spend over two years. We went for steaks and many beers in Soho to celebrate campaign successes. I remember counting back on the CRM and between phone, email and LinkedIn there had been 32 attempts before that first reply.

I’m not saying send 32 emails. That one, I knew we had the product/market fit absolutely nailed down and I knew the campaign would work. I was both determined and confident this would go down well if I just got the chance.

Are you nodding along while reading this?

Well, why not get in touch and see if Make the Break might be able to help you out. What have you got to lose?

Let’s get some perspective here. This is a multi-channel game. Email is but one but one route for new business conversations.

Effective Business Development can and should be done across multiple routes. Personal brand is key. It’s not about being everywhere on every channel, it’s about showing expertise in a select group of places where the customer hangs out. (Hey, you’re reading this aren’t you?). You only need to wander into LinkedIn and see the people who are generating entire businesses from inbound leads from that one platform.

It also, should really go without saying that sales should not be operating in a vacuum, independent of marketing. This whole process is a prime example of the benefits of sales and marketing working together. If the prospect has a decent level of awareness and knowledge of the brand and its potential before a first sales contact, then unsurprisingly the whole process is much more likely to succeed.

In the example above of the CMO who turned into a long term partner, I alternated between phone, email and LinkedIn. The phone is still incredibly important. Perhaps more than ever as it’s a channel fewer seem to be comfortable with.

One email that works

I am happy to share a move that personally I’ve seen work again and again as part of an approach. This is one Business Development email to put in your toolbox.

After a couple of messages, if no response, I send a short message saying

I thought I’d try one more time, because X

The wording here is key. Not ‘one last time,’ because everyone knows that is a bluff. One more time and accompany it with a reason why taking this conversation on could be hugely beneficial from their seat. (In the example below, the introducer is the company chairman).

This email is tried and tested and I reckon I get at least a 20% response rate, often with a note to say let’s set up a call. 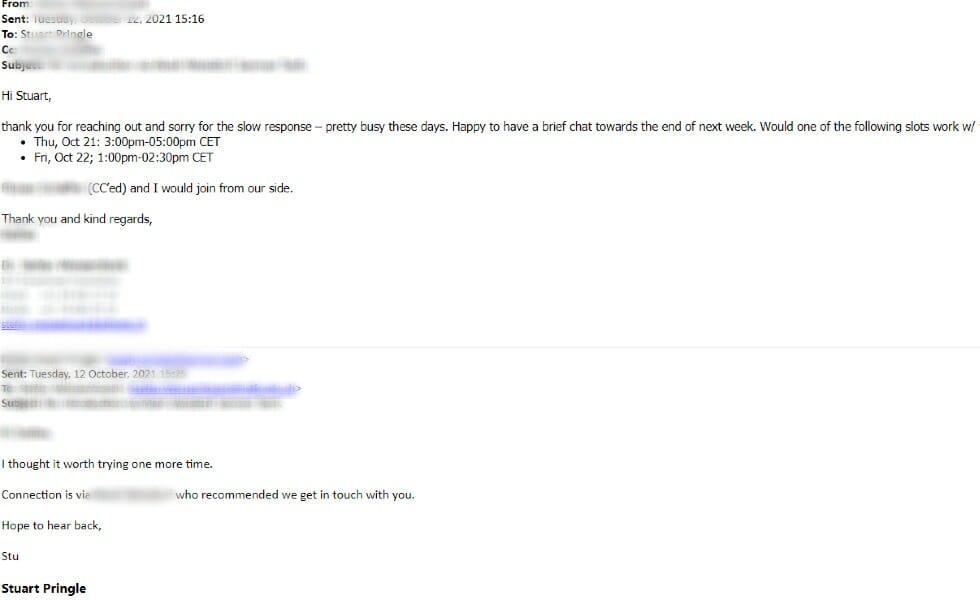 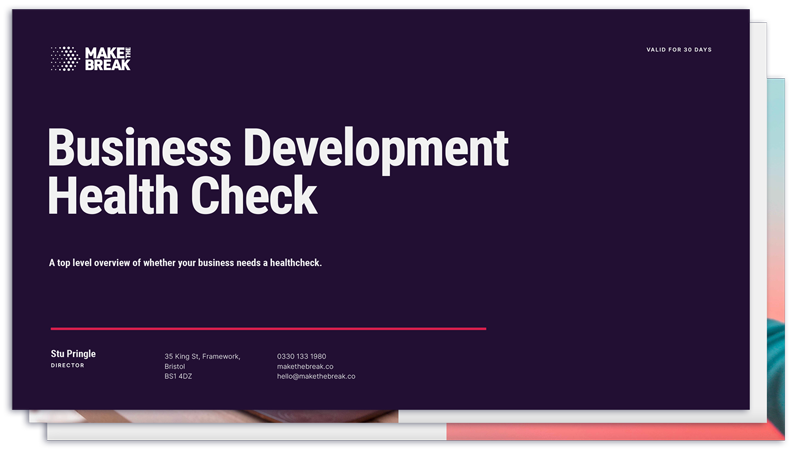 Like to know what kind of health your business development setup is in?

You have Successfully Subscribed!